Types of Excavators and Attachments 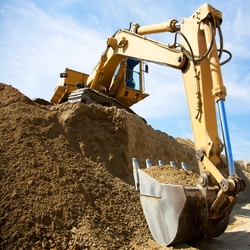 Compact excavators typically have smaller widths than standard excavators, and some even incorporate an expandable undercarriage feature that allows the undercarriage width to be decreased when traveling between tight spaces (doorways, gates, etc.), then it is expanded once the machine has passed the obstacles or confined area.

It should be noted that some of the above functions can only be performed with an appropriate attachment for the excavator. Crawler excavators are slower than wheeled excavators, but are more balanced and stable during work operations. They are also less apt to get stuck in muddy conditions, and more stable for working on steep or other rough terrain.

Suction Excavators utilize a powerful suction attached to large pipes directed into the ground in order to remove material from underground locations. Suction pipe is typically around one foot in diameter and suction air speed can reach 220 mph (100 meters per second) of suction force. Suction excavators weigh between 7-32 tons and the horsepower ranges between 172-400 HP.

Suction controls allow operators to switch the suction on and off. For instance, if the pipe encounters an object that is too large to enter the pipe, the suction can be temporarily deactivated in order to release the large object. Suction excavating is the most common type of excavating for underground utility operations, as it reduces chances of damaging underground utilities by more than 50 percent.

Augers are available for different types of terrain. A range of torque specifications and length accommodate the appropriate digging conditions. Higher torque provides maximum digging power, while length can range anywhere from 100 mm on smaller machines to 1200 mm on larger machines. Digging depth can reach up to 10 Meters.

Standard augers are capable of most digging tasks. However, for tough digging conditions (such as rock and sandstone), augers implemented with Tungsten teeth may be required.

Breakers are similar to jackhammers, but are much larger. These attachments are used specifically for tough jobs such as breaking stone or concrete. Breakers can be quickly and easily attached, and can be utilized on various machines. Modern breakers typically range from 60 to 1000 ft.-lb. impact energy.

Buckets are typically made of hard steel, and have teeth on the digging edge of the bucket to ensure maximum digging and scooping performance. There are several types of buckets designed for various tasks.

If the bucket can be thought of as a hand, the clamp attachment would be the thumb. This allows operators to pick up large material (concrete, tree stumps, etc.) that would not typically fit in the bucket. Clamps can be used with trenching buckets or three-tine grapple. Easy attachment configuration allows the clamp to be attached and detached quickly to avoid disruptions in operations.

Flail Mowers are used for landscaping operations such as chopping tall grass or tough shrubs where a standard mower simply wouldn't make the cut. The mower can be angled to use as a shrub or hedge trimmer, and can perform a variety of other useful landscaping functions. Flails are designed to bounce off of immovable objects, although some are designed to pick up and eject smaller objects such as rocks.

Grading blades are designed for smoothing out rough areas of terrain that has already been demolished. Attachments come in a variety of sizes specifically designed for use with various machines and terrain.

Grapples are used for picking up large pieces or amounts of material. Some are designed for tough construction jobs, while others are designed for waste handling operations. Quick coupling attachments allow grapples to quickly be interchanged with other machines and attachments. Grapples can be hydraulically rotated and angled in order to approach material from practically any angle.